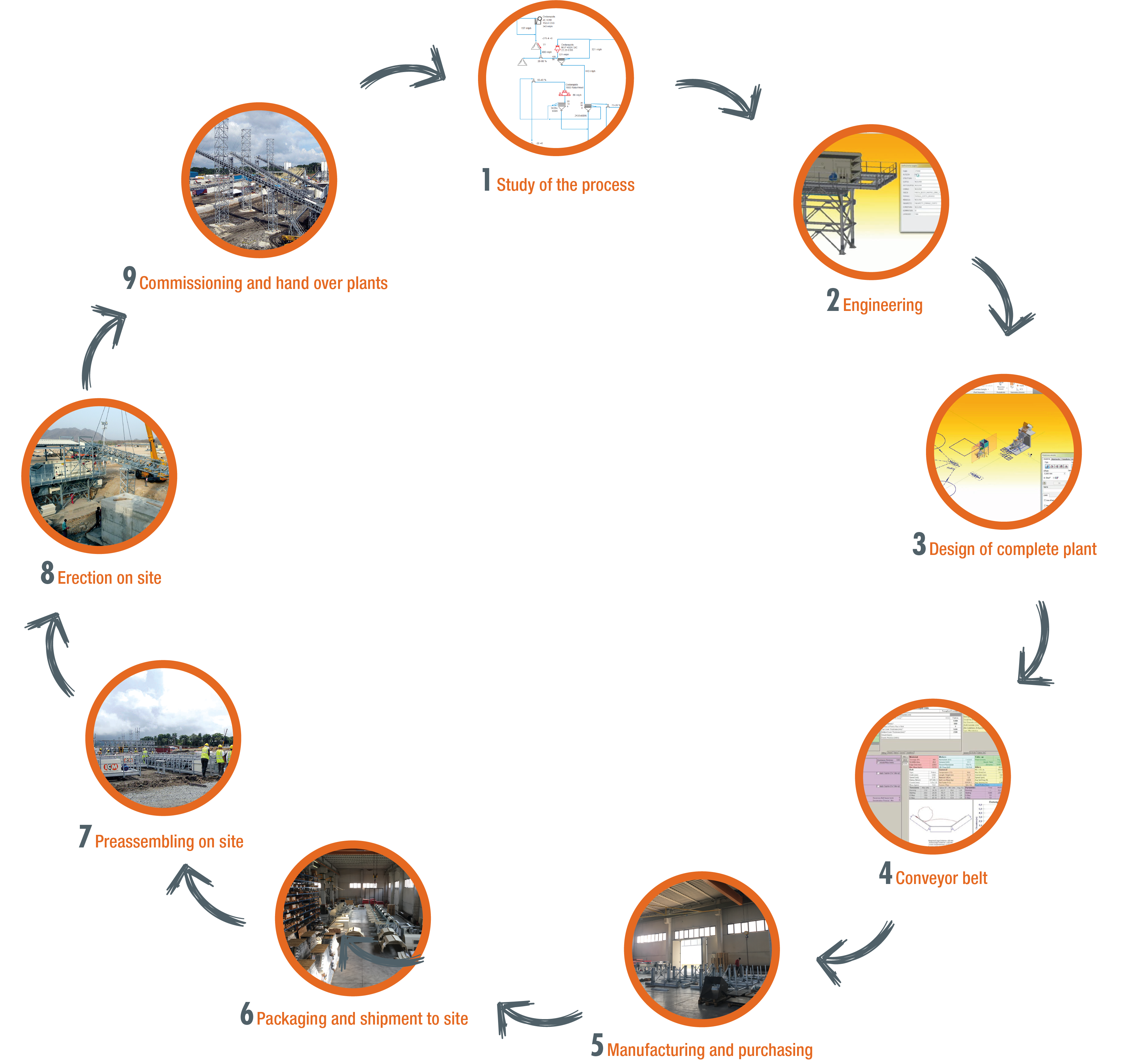 ICM has step by step become a “contractor” for the supply of turnkey crushing plants.
Our activity is divided into several stages in which the use of computer programs is a master.

1. STUDY OF THE PROCESS
After the customer contacts us for an installation we ask him for the dimensional, physical and chemical characteristics of the material to be treated and which are the final products required. We often have to do the analysis because the customer is not able or does not want.
With this information we study the production process with Agg-flow. This program allows us to balance production and prevent some classes from being produced in excess. In this regard we recall that the VSI is the broom of the construction site that turns all the excesses of classes lower than 30 mm into sand. Thanks to the performance of our machines we can close sand with three stages of crushing only. We use compression crushers, jaws and cones, without worrying about the shape, to reduce the hard and abrasive material to the size of use and then treat it in a VSI to obtain polyhedricity and requested percentages of various classes. Not abrasive material will be, of course, crushed with impact crushers.

3. DESIGN OF COMPLETE PLANT
Once the process has been defined, the engineering department develops the plant design based on a freehand sketched layout, often agreed with the customer. We know that every plant is tailored to the customer and the design is very demanding and laborious. The above quoted configurator allows a person to design an extremely complex system within ten days. Thanks to this configurator, the plant is completely designed before presenting the offer to the customer. Using the previous configurated blocks with the crushers and the screens we can design the complete plant and have the drawing of each component ready for the workshop done by the computer. The cancellation of the design times practically made us to win the supply of the Panama plant as we delivered the plant in ten months against a competition that demanded twenty-four.  Once the plant is completed all the files of the drawing are available to be sent to  manufacturing.

4. CONVEYOR BELT
A dedicated program allows us to design the belt conveyor down to the smallest detail. All the conveyors are designed to fit the layout, the capacity and the size of the material. The conveyors are built as a bolted structure to reduce the manufacturing time and to optimise the manufacturing costs. We can supply conveyors of any length and capacity both for plants and for land conveyors to transport the materials.

5. MANUFACTURING AND PURCHASING
Once the design has been defined, the drawings are sent to the supplier for the manufacturing. To reduce construction times, we have abandoned the welded construction, which requires a lot of skilled labour, in favour of the bolted construction whose components are produced by automatic machines to which it is enough to send a file “step” format to produce the piece of the drawing. Also, for the Panama plant, two thousand and five hundred tons of hot galvanized carpentry were produced in forty days. At the same time orders are issued for commercial parts: belts, bearings, bolts etc.

6. PACKAGING AND SHIPPING
The shipment of the plant usually takes place by container for overseas countries or loaded on trucks by land. All the components are marked and we prepare a layout of the stands where to store the loads and, thanks to a computerized identification system, the search for the pieces necessary for assembly is practically immediate. The sending of bolted carpentry allows considerable savings on transport as it is possible to exploit the full capacity of the vehicle. In Panama, the cost of transport was half that of the competition.

7. PREASSEMBLY ON SITE
The carpentry must be pre-assembled to have the pylons, the columns, the bases of the machines and the conveyors lattices. With some well-educated teams and some organization, assembly times are comparable with welded structures. Above all, there are no mounting problems due to the deformation caused by the welds and the torch is not needed to proceed with the assembly. The 3D design is so strict that, once the drawing is done, no preassembly is needed and the parts will fit without any need of adjustment.

8. ERECTION ON SITE
After the pre-assembly the structures are transported and installed on the previously prepared concrete foundation. As the erection progresses, the power and control electrical system is installed, followed, if present, by a plant for washing the aggregates and the treatment of water and sludge.

9. COMMISSIONING AND HAND OVER
Once assembled, the machines are adjusted and tuned, the conveyor belts are tensioned before moving on to the blank tests. Then the plant is gradually loaded until the contractual productions are reached. During the test we intervene to fix any problems: direction of the flow of the material to be corrected, chutes that overflow, etc.

Our customer is never abandoned,

but SUPPORTED and ACCOMPANIED

throught the long life of the plant.